Teeming with wildlife, roughly a quarter of Costa Rica is protected jungle, making it the ultimate destination for nature lovers. Whether your customers are looking for an immersive, multi-day itinerary or simply a handful of day tours to complement a beach vacation, we can help.
Our Costa
Rica office boasts over 25 years managing group adventures, honeymoons, tailor-made itineraries and much more.

Some inspiration for Costa Rica... 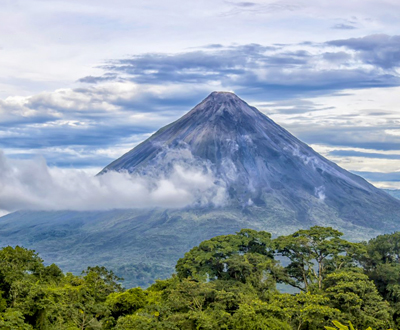 An adventure that takes travellers on a tranquil boat ride along a gorgeous river in the Palo Verde National Park, surrounded by the stunning rainforest inhabited by an innumerable variety of animal species and exotic vegetation. The tour includes a visit to the town of Guaitil, famous for its clay handicrafts.

This natural and cultural tour is operated at a different hour to offer travellers exclusivity and comfort. A visit to an artisan village provides travellers with an opportunity to learn about clay vessels and receive a unique farewell gift.

This tour begins with a comfortable ride where travellers visit the Vandara Hot Springs & Adventures Park for a day of joyful experiences. Visitors can enjoy horse riding, ziplining through the canopy, whizzing down water slides, and end it all by taking a soothing dip in the Tizate thermal pools. After an incredible day of adventure, enjoy a delicious typical tasty Tico meal before going back to the hotel.

Discova travellers gain exclusive access to a restaurant area within the thermal pools that provides a magical setting with ambient lighting for your evening meal.

Currency: The country’s official currency is the Costa Rica colon (₡). ATMs are found throughout Costa Rica, accepting most debit and credit cards, whilst banks and money exchange counters (only found at the airport) exchange most major foreign currencies. However, most of the local businesses accept the American USD, therefore, if travellers have them there is no need to exchange.

More than 70 countries and territories, plus all European Union nations, can visit Costa Rica without a visa for either 30 or 90 days. Some guests from countries that need visas to visit can apply for one at the Costa Rica consulate. Other nationalities require a “Costa Rica Restricted Visa”, which needs to be applied for by someone else who is already in Costa Rica. There is something of a loophole though – visitors from countries that need a visa for Costa Rica are exempt from this requirement if they hold a valid tourist visa for the United States, Canada, an EU member state, a Schengen country, Japan, or South Korea. With the popularity of Costa Rica tailor-made holidays, we speak with some of our Costa Rican friends on why their home is such a special place to visit.
Read More >>>

Help travellers prepare for a trip to Costa Rica with this guide to the must-try treats of Costa Rican cuisine. Find out why the country’s population has a reputation for being food-lovers.
Read More >>>

Costa Rica is a key leader of the sustainable tourism movement, prioritising eco-tourism and nature preservation at every level of its development for decades. Read more in the Discova Diaries!
Read More >>>